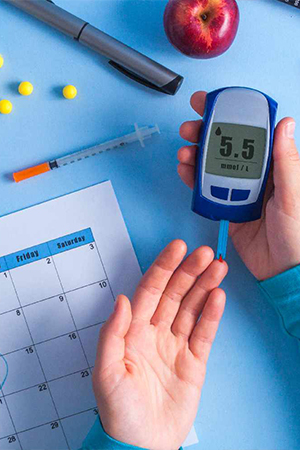 Statement of the problem: Diabetes mellitus (DM) is the most common cause of diabetic neuropathy (DNP) comprises a heterogeneous group of disorders that can cause neuronal dysfunction throughout the human body. The incidence of diabetes and its complications is increasing to staggering proportions. In 2014 the WHO estimated an overall prevalence of 422 million (8,5%). The incidence of diabetic neuropathy approaches 50% in most diabetic populations; there is no treatment, and its consequences in the form of foot ulceration and amputation.

The recent studies suggest that the renin angiotensin aldosterone system (RAAS) plays a vital role in regulating glucose metabolism and blood pressure. In the same time the metabolic abnormalities associated with diabetes lead to activation RAAS, which might promote the formation of reactive oxygen species to lead the endothelial and neuronal dysfunctions. Furthermore, TNFá is part of the response of the organism to hypertension and is originally described as one of the central mediators of inflammation trough the activation of transcription factor NFêB an important factor in the control of cell proliferation, differentiation, and apoptosis.

Methodology & Theoretical Orientation: The study population consists of 15 individuals diagnosed with DM complicated by DNP. The enrolled subjects will take Telmisartan during 6 weeks. At the start of the trial and on completion of the six weeks period TNFá level and C-peptide as well as evaluation of severity of DPN will be determined.

Conclusion & Significance: Our results confirm hypothesis that TNFá may play a substantial role in the development and progression of DM as well as in pathogenesis of DPN. Telmisartan moderately ameliorates symptoms of DPN patients by visible modulatory impact on TNFá. So, we have results for further research to compare Telmisartan with other RAAS inhibitors for final clinical and pharmacological analysis of RAAS inhibitors application in diabetic neuropathy.